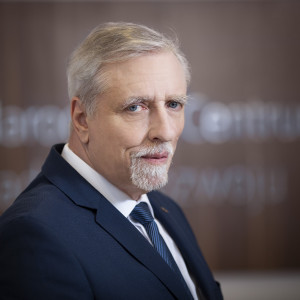 Company: The National Centre for Research and Development

PhD Eng., Director of the National Centre for Research and Development

Mr. Kamieniecki graduated from the Faculty of Automatic Control and Computer Science at the Silesian University of Technology and earned a PhD in Economics, specialising in Management Studies, from the University of Szczecin.

He has long-standing experience in managing enterprises and large-scale projects in the telecommunications (Multimedia Polska S.A., Nordisk Polska Sp. z o.o., EXATEL S.A.), and photovoltaic (Mielec PV S.A.) industries. He is an expert in the evaluation of projects involving the construction of regional broadband networks, and last-mile networks.Mr. Kamieniecki has authored numerous research publications in the field of growth strategy, business management, and business value development.

He has extensive experience in negotiating contracts for disposals, acquisitions and mergers of companies. Mr. Kamieniecki was the General Manager of the largest project involving the construction of a regional broadband network in Europe (Internet for Mazowsze – Internet dla Mazowsza).

In recent years, he was employed with the Research and Academic Computer Network (NASK – Naukowa i Akademicka Sieć Komputerowa), where he co-developed and managed projects involving the establishment of the National Cybersecurity Centre (Narodowe Centrum Cyberbezpieczeństwa), the Nationwide Education Network (Ogólnopolska Sieć Edukacyjna), and the merger of NASK with the Institute of Mathematical Machines. As a result of its rapid growth, the Institute was granted the status of National Research Institute, and the National Cybersecurity Centre joined the Computer Security Incident Response Team (CSIRT), an entity that operates under the National Cybersecurity System Act of 5 July 2018 (Journal of Laws of 2018, item 1560). The objective of the Team is to provide civil defence of state operations and Polish cyber space.

In November 2018, he was appointed to the Council of the National Centre for Research and Development , where he assumed the role of Chairman of the Finance Committee. Since 30 July 2019.